Many years ago I was teaching an herbal class. In it, we were discussing fertility and pregnancy. I was teaching much of the information in this article. Afterward, a female student, who was a medical lab technician in her early 30s, thanked me for the class. She said that she and her husband had been trying to conceive for several months with no luck, and now she understood why. They had been timing their intimate encounters at exactly the wrong times of the month because she did not understand fertility at all.

Even with all the information that is available on the internet, I find that many couples do not understand fertility, how their lifestyle affects it, and what they can do to enhance it.

The menstrual cycles bring with them a myriad of symptoms that can often be easily grouped into fertile and non-fertile phases. This information can prove invaluable in helping fertile couples plan their families, less fertile couples achieve pregnancy, and infertile couples see where their challenges may be.

The first day of menstrual flow is considered to be the first day of the cycle. In a ‘typical’ (is there really such a thing?) 28-day cycle there will be three to five days of menstrual flow, followed by a few days with very little vaginal moisture or lubrication. Once the flow is finished, the lining of the uterus begins to rebuild to accommodate and nourish an embryo if fertilization occurs later on in the cycle.

Generally, by about day ten, a woman will notice a vaginal discharge. It begins as a ‘tacky’ substance. The consistency changes over the next few days to become much more slippery, much more abundant, and very stretchy, like an egg white. When the mucus stretches ten cm (four inches), fertility is at its peak. To optimize the chance of conception, intercourse should happen every 36 to 48 hours during these ‘wet’ or ‘mucusy’ days.

Then, quite suddenly, the mucus will be gone (although this is much less obvious if semen is present), and the fertile time is over. The take-away here is: vaginal mucus predicts impending ovulation.

How to Tell if You've Ovulated

Basal metabolic temperature can be used to confirm that ovulation has happened. Basal temperature is the lowest temperature the body reaches in a 24-hour period. Typically, this is just shortly before waking up.

Using a basal metabolic thermometer (available at most larger drug stores), which has been prepared the night before and left on the bedside table, the temperature is taken upon waking and before getting out of bed or engaging in any activity at all - including but not limited to rolling over to kiss your sweetheart good morning. The thermometer stays in place for five minutes.

It is important to take the temperature within a half-hour of the same time each day. If you normally arise at 6:00 AM, your temperature-taking window is 5:45 – 6:15 AM, even on weekends, but you are free to go back to sleep afterward if you like!

Taking the temperature vaginally is the most accurate way. The temperature may then be recorded on graph paper or on a website like www.fertilityfriend.com. I prefer fluid-filled thermometers (even though they are getting harder to find) to digital ones. If the batteries in the digital thermometer get weak, the readings may not be accurate. 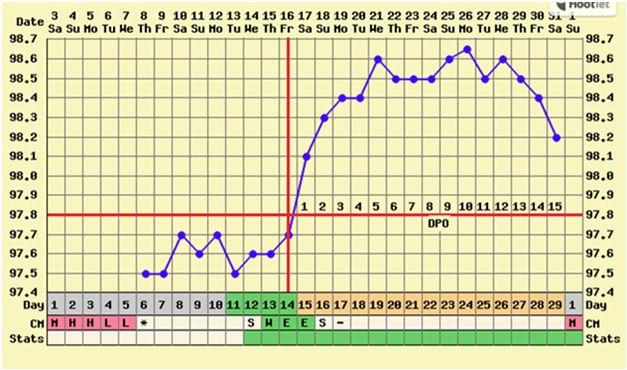 In order for an embryo to implant in the uterine lining, the woman ideally needs to have 12 - 16 consecutive high temperatures after ovulation. The high temperatures are caused by the balance between estrogen and progesterone. Progesterone, specifically, plays an important role in maintaining pregnancies.

Cycles that regularly have less than 10 high temperatures generally do not have enough progesterone to allow the embryo to implant well in the uterine lining, which means even if fertilization happens, pregnancy will not. There are herbs that can help to increase progesterone and may assist in maintaining a pregnancy in a woman who has lower than optimal progesterone levels.

The position and firmness of the cervix can help to predict and confirm ovulation, also. The cervix can be checked by inserting one or two fingers fully into the vagina. Normally, with the pads of the fingers facing toward the front of the body, the cervix will be felt against the pads of the fingers as a fairly firm (like the tip of one’s nose) ring of tissue with a dimple in the middle.

As ovulation approaches, the cervix will rise higher in the vagina, and the angle will also shift so as to be felt with the tips of the fingers instead of the pads. It may rise so high that it is difficult to reach. I’ve fielded a few panicky phone calls of “I can’t find my cervix! Where did it go?”

The cervix will also soften to feel more like one’s lips. The ‘dimple’ will open. When ovulation is over, the cervix will return to its original lower position in the vagina, become firm again, and close.

Some women have very little vaginal mucus, or the temperature shift is delicate. I have found this usually to be an indication that the hormones are either low or not properly balanced. Regardless of blood test results from the doctor, if the vaginal mucus is not copious, and/or if the temperature pattern is not obvious, I help my client correct them with herbs and diet. I have seen basal temperature charts that indicated very low fertility correct to become ‘textbook perfect’ within a few months by implementing the proper diet and supplement protocol.

Ovulation does not always happen on day 14. In a ‘textbook’ cycle of 28 days it can happen anytime from 12 to 16 days before the next menstrual flow. It is the time before ovulation that is the most variable. If a woman has long cycles, ovulation will happen later in the cycle. A 35-day cycle, for instance, will often show ovulation at day 19 - 23. This is why it is so important for a couple who is trying to conceive to understand vaginal mucus and basal temperature, at the very least.

Cycles that average less than 25 days or more than 42 days are usually not fertile.

To recap: vaginal mucus starts before ovulation, is most copious and stretchy at ovulation, and disappears after ovulation. The cervix rises, opens, and gets softer at ovulation then drops, closes, and firms up when ovulation is complete. The first three consecutive high temperatures confirm that ovulation is over and the woman is no longer fertile in this cycle.

Here are the top six things, beyond dietary corrections (and that’s a topic for another post), that a woman can do to boost her fertility.

If conception is not happening in spite of properly timed intercourse, or if the temperature and mucus are not behaving properly, the hormones are out of balance. Herbs and nutrition can be used to stabilize and support hormonal optimization. This is where it can be helpful to work with a practitioner who is well-versed in herbs and nutrition.

Because infertility challenges can originate with the male partner, he should have his sperm checked as a matter of course.

Slow or poorly formed sperm can often be corrected with nutrition and supplements, but remember, it takes 90 days to make sperm, so the following steps need to be long-term changes.

Here are the top eight things, in addition to food, that men need to do to enhance and protect their own fertility.

If you would like support in working to enhance your fertility, give Judith Cobb a call at 403-850-5503 or use this link to schedule an appointment.